The Google Play Developer Console also provides detailed statistics about your users' devices. Those stats may help you prioritize the device profiles for which you optimize your app.

This page provides information about the relative number of devices that share a certain characteristic, such as Android version or screen size. This information may help you prioritize efforts for supporting different devices by revealing which devices are active in the Android and Google Play ecosystem.

This data reflects devices running the latest Google Play Store app, which is compatible with Android 2.2 and higher. Each snapshot of data represents all the devices that visited the Google Play Store in the prior 7 days.

This section provides data about the relative number of devices running a given version of the Android platform.

For information about how to target your application to devices based on platform version, read Supporting Different Platform Versions.

Data collected during a 7-day period ending on June 1, 2015.
Any versions with less than 0.1% distribution are not shown.

Note: This data is gathered from the new Google Play Store app, which supports Android 2.2 and above, so devices running older versions are not included. However, in August, 2013, versions older than Android 2.2 accounted for about 1% of devices that checked in to Google servers (not those that actually visited Google Play Store).

This section provides data about the relative number of devices that have a particular screen configuration, defined by a combination of screen size and density. To simplify the way that you design your user interfaces for different screen configurations, Android divides the range of actual screen sizes and densities into several buckets as expressed by the table below.

For information about how you can support multiple screen configurations in your application, read Supporting Multiple Screens.

Data collected during a 7-day period ending on June 1, 2015.
Any screen configurations with less than 0.1% distribution are not shown. 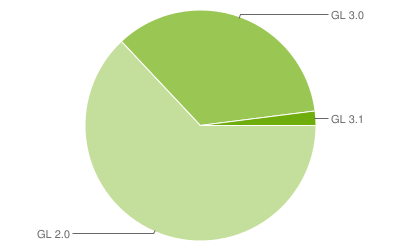 You have successfully signed up for the latest Android developer news and tips.